I haven’t written for a while. Excuse me while I ramble for a bit.

Each morning (well, most mornings… sometimes afternoons… sometimes I skip it because I’m busy or lazy or in a mood or whatever), I dig into JD Walt’s Seedbed Daily Text. I highly recommend it as a Biblically rich devotional written by a servant of God with a broad intellectual skillset and the heart of a poet.

We’re in the Gospel of Matthew right now, as John the Baptist cries out, “Repent, for the kingdom of Heaven is near!” As I process some of my thoughts on his thoughts on God’s thoughts, I’m going to piggyback on some of what he said this morning. I’m just saying that this is mostly me, but he deserves credit (or blame, if you disagree) for the direction and it’s only fair that he get it. If you want to catch up, this particular devo is permalinked here.

Way back in the day (colloquially speaking – it was actually an evening), my youth pastor taught one of many lessons on repentance. This one stuck with me for a number of reasons. First, because it was a time in my life that I was in a weird tension that a lot of Christian teens go through… I had “given my life to Christ,” but had developed excellent compartmentalization skills. I’d given the part of my life that went to church and youth group to Christ, but the part of my life that smoked pot and was committed enough to take the time to download porn on a 28.8k modem and other bad stuff remained firmly separate. The tug of war that ebbs and flows and never seems to quite stop completely was at a high point, and I knew that I needed to “repent.”

I mean, I’d pented at least a few times before, and it obviously hadn’t stuck, so I apparently had to do it again.

Repent is a powerful word. It’s explosive, just in terms of its sound. It gains momentum coming off the lips, pulsing out in a way that leaves an impact. It hangs in the air waiting for a response. Even if you’ve heard it a million times, it sits there, slapping at your conscience, demanding acknowledgement, even it it’s just to turn it away again.

It’s also foreign to our modern language. It’s become the exclusive domain of religiousity, and so, while demanding, its also somewhat amorphous and confusing.

The second reason that his lesson sticks in my memory is that he gave a pithy, one sentence definition of repentance that was easy to grasp. He said that, “Repentance is a 180 degree turn from where you’ve been going,” and had kids demonstrate in an object lesson by walking in a straight line across the room and when he yelled, “Repent!” they’d have to turn around and go back in the other direction. It was a good lesson. It was simple and to the point and something a teenager could understand. And so I repented.

And no matter how many times I did that about-face and turned 180 degrees from where I was going, my course would slowly wander and I’d find myself heading back exactly the way I had been.

Because he was wrong.

And I was wrong when I taught the same thing.

The problem with viewing repentance as a 180 degree turn from the way you were going is that it still focuses on you and the way you were going. It’s like trying to drive by looking in the rearview mirror. It’s appealing to a self-absorbed, self-addicted people because it maintains our self direction – even if we’re directing ourselves by not going somewhere. It’s our direction – anchored by our former direction – dependent on our vision and our conscience and our experience. Our new direction is entirely dependent on our old direction. That doesn’t work well.

The whole idea of trying to navigate by going away from something is just profoundly stupid. And that’s kind of what John is saying.

The good news is that the true point of navigation is near. It’s not ephemeral. It’s not abstract. It’s among us now.

It matters what God.

To be clear, behaviors will change but that change will come from a far deeper place than mere compliance with the rules. It will come from the deep wells of our transformed dispositions, affections, desires and from the Holy Spirit inspired dreams of the beautiful, good and powerfully loving lives we were created to live. To repent means to realign our entire lives to become the remarkable kind of people Jesus would be if he were you and me. Repentance does not start with a stinging self examination of our shame-filled selves. No, it begins by beholding the face of God in Jesus Christ, inhaling the Holy Spirit breathed Word of our own beloved-ness and exhaling the breathtaking beauty of the now-appearing-all-things-are-possible Kingdom of Heaven.

That’s probably enough for today. I’m not done thinking about it. It feels important.

Because there’s something in me that needs to be pent. It needs to be contained and constrained and confined because it has its way with me in a way I don’t like and I don’t like myself when it does. I’ve pent it. I’ve repented it. I’ve repented it again. The only way it’s going to stay pent-up is if God does it. To stop moving away and move towards. To stop being defined by it and get a new definition.

Brothers and sisters, I do not consider myself yet to have taken hold of it. But one thing I do: Forgetting what is behind and straining toward what is ahead, I press on toward the goal to win the prize for which God has called me heavenward in Christ Jesus.

I’m not sure where this falls on the spectrum, but for the past few days, I’ve been thinking more and more about the Pew Research study (supposedly showing the decline of American Christianity) and the spins that various media outlets are giving it. The popular consensus seems to be the one that Ed Stetzer puts forward: that committed, or “convictional” Christians aren’t going anywhere, while “nominal Christians” (Christians in name only), or Default Christians as I put it in a recent post, aren’t checking the box any more. That’s basically what I said, and I likely wouldn’t have bothered saying it if I’d already known the number of much “larger” names saying the same thing.

In a nutshell, I said that it was a good thing. I said that nominal Christians shouldn’t be called Christians anyway. Then I went another step further to say that there are still a lot of nominal or default Christians in our pews that should basically go home and stop pretending. I said that if they did, then our churches would be more free to follow Jesus. I compared them to the fat of the church. Sometimes I’m an ass. 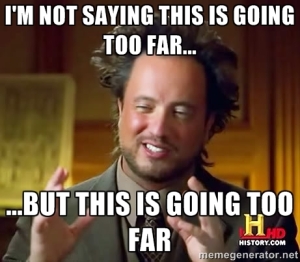 It’s not that I’m entirely wrong in what I said (I don’t think). Having pews full of marginal and uncommitted people who aren’t willing to commit to following Christ—becoming “real” Christians—does “weigh our churches down” and leave a less effective witness. I’ve been convinced, though, that my attitude towards it is unChristlike.

A big part of that was a reevaluation of Jesus’ “outreach” program, particularly as referenced in Matthew 9:11 —

When the Pharisees saw this, they asked his disciples, “Why does your teacher eat with tax collectors and sinners?”

and, lest there be any confusion about exactly what kind of people these Pharisees meant, Matthew 11:19 —

The Son of Man came eating and drinking, and they say, ‘Here is a glutton and a drunkard, a friend of tax collectors and sinners.’

Those passages are nothing new to most Christians. I’ve heard them a million times. I’ve quoted them and taught from them. I think about them as I think about the people that to all of the obvious things that we assume people outside of the Church do… those filthy “non-Christians”… the sweaty unchurched. I think about Jesus going into bars and building relationships and teaching them grace. I think of it as an example or a metaphor for us going out into “the world” to “reach people” for Jesus.

The thing is, that’s not what happened.

By simple arrangement of geography and priorities, Jesus rarely, if ever, hung out with the “unchurched.” If we want to look for examples of outreach to the Gentiles, we need to look at Paul and the post-ascension apostles. Jesus, in his own words, came to seek and save the lost sheep of Israel. The tax-collectors, the drunkards, the whores and the sinners, they were Jews. They were people that knew God, born and raised in the synagogues, but lived contradictory lifestyles. They were backsliders. They were the nominals. They were the default Jews.

I don’t know what went on behind closed doors. I don’t know what Jesus looked like at their feasts and parties, and I’m not going to presume to. I do know that Jesus wasn’t rejoicing over them leaving. He certainly wasn’t coming down on them with God’s own thunder for their “sinfulness”. He loved them. He spent time with them. He was Jesus to them.

So much of the time my grace runs out at the door of the church. When I look at nominals as a pastor, especially long-term nominals, I get frustrated. I have a get-in-or-get-out mentality. I want to pour my effort into the people that seem to be “getting it,” and not waste it on the people that don’t. I want them to drop their crap and commit so that I can lead them.  I’ll give all sorts of room for non-Christians to be messy. It’s expected. Sinners gonna sin. When it comes to people that have claimed the Savior, though, I have different expectations, and I don’t know what to do when my expectations aren’t met, so most of the time I ignore them. If I don’t ignore them, I want to preach at them so they’ll stop frustrating and embarrassing me.

Because it’s about me. My frustration. My embarrassment on God’s behalf.

Apparently Jesus has a lot more grace for nominals than most of us do. Maybe instead of wanting to clear them out so that the faithful can move forward to reaching the unchurched, we should be “coming to seek and save the lost sheep of Christianity.” Honestly, I’m not entirely sure what that would look like. I do know that it probably looks like something that could get a “good Christian” a bad name or a pastor a reputation for lackadaisical faith.

I know that there are plenty of times that scripture calls out the “lukewarm,” and Jesus calls for extreme commitment, but there’s something else going on too. It’s something I need to learn and explore. I know I’m going to tend to waffle around between extremes, but a pursuit of Christlikeness means continually adjusting my aim. Right now, I feel like God is reminding me of something important.

Jesus, friend of nominals, loves them. I can’t throw them under the bus.